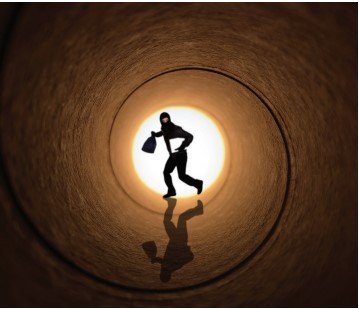 WHILE RANSOMWARE is making the headlines as the major cyber threat, small and mid-sized businesses are increasingly being targeted by lower fraud that dupes them into wiring criminals funds, according to a new report.

These funds transfer fraud crimes involve hackers gaining access to a firm’s mailbox and extracting payments that go into their accounts. Companies should have in place proper systems safeguards to combat these attacks, and that includes regularly training staff on how to identify these attempts to steal funds. 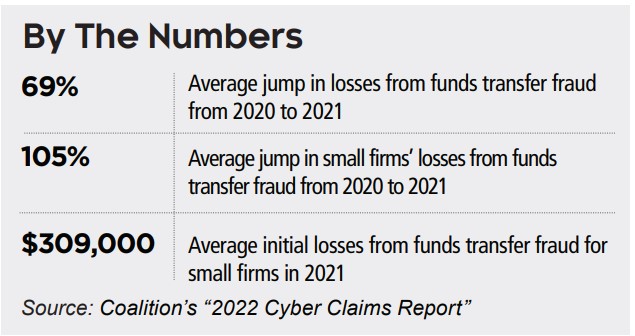 Criminals will often try to penetrate your servers by sending “spearphishing” e-mails. These messages look like they’re from a trusted sender to trick victims into revealing confidential information. They may also send malicious e-mails in the hope that an employee clicks on a bogus link. The link then releases malicious software that infi ltrates company networks and gains
access to legitimate e-mail threads about billing and invoices.
Once the criminals have access to your business mailbox, they can manipulate your contacts and modify payment instructions. They may also use their access to your systems to send e-mails that appear to come from a known source making a legitimate request. 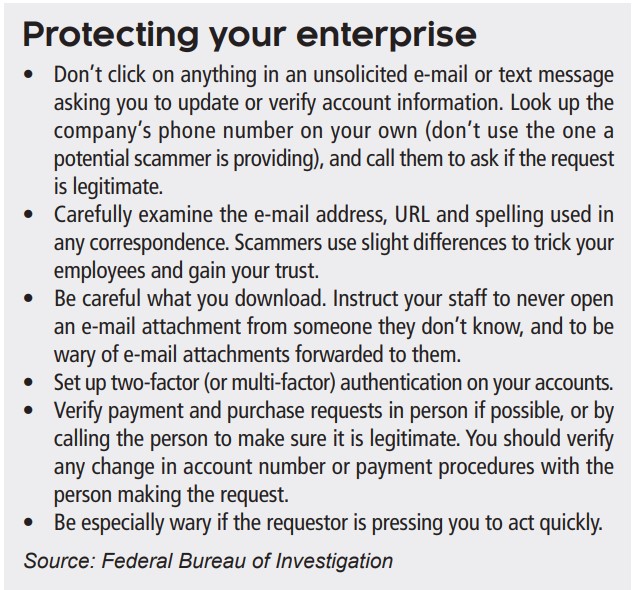 The best option for coverage is a commercial crime insurance policy. Most of these policies cover acts like:
• Employee dishonesty
• Computer and funds transfer fraud
• Forgery or alteration
• Money and securities theft
• Theft of client’s property.

Some policies may exclude funds transfer fraud, or they may have lower sublimits for such acts. In such cases you may need to get a policy extension to cover the risk. There is also cyber liability insurance, which covers direct losses resulting from cyber crime. But these policies will often exclude coverage for social engineering attacks, which are the kinds that the criminals behind funds transfer fraud use. You may be able to purchase a rider to your cyber liability policy that would cover these crimes. 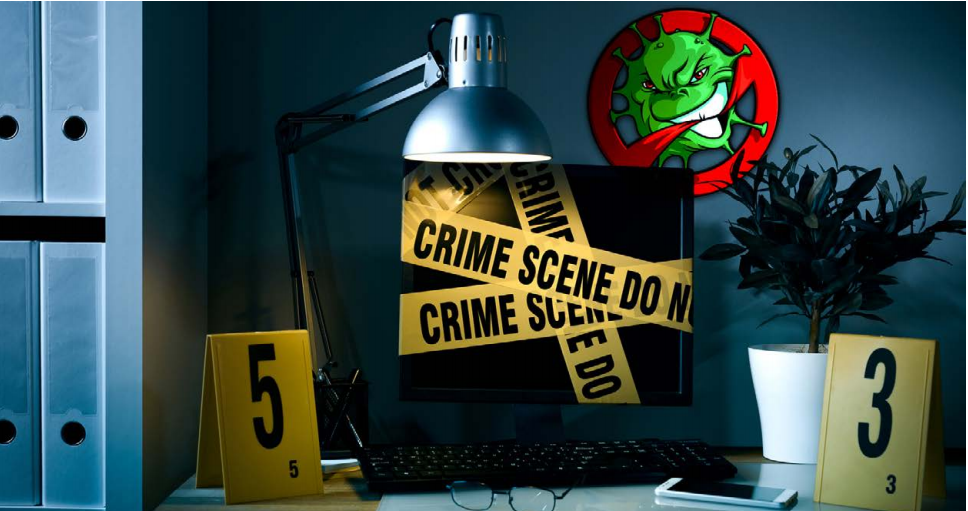 AS IF BUSINESSES didn’t have enough to worry about, online scammers have started sending out malicious e-mails to organizations about coronavirus that appear to be from business partners or public institutions. The criminals send these to rank and file employees in the hope that at least one of them will click on a link or attachment in the e-mail, which unleashes malware or tries to trick them into wiring money for supplies purportedly to protect the organization’s workers.

The number of malicious e-mails mentioning the coronavirus has increased significantly since the end of January, according to cybersecurity firm Proofpoint Inc. The company noted that this wasn’t the first time they had seen such widespread cyber attacks associated with some type of disaster. But because this is global in nature, it decided to track the new threat. This practice of launching cyber attacks that are centered around global news and outbreaks (like the current COVID-19 coronavirus) isn’t anything new. Cybercriminals have long employed these tactics to take advantage of users’ desires to keep as up to date with any new information as possible or to evoke powerful emotions (like fear) in the hope that their sentiments will get the better of them and they will not pause to check for the legitimacy of these e-mails.

The cybercriminals are using the public’s ignorance about coronavirus, as well as the conflicting claims of how to protect against it, to lure people into clicking on their malicious links or get them to wire money. Because people are afraid, their guards may be down and they may not be as careful about identifying the e-mail as dangerous.

• Japanese workers were targeted in January and February with e-mails that looked like they came from local hospitals. The messages even included legitimate contact information for key personnel. The e-mails were focused on employees of various companies and came in a message that would look like it’s a reply to something or a warning that people are getting from the government. But when they clicked, it was malware. E-mails were sent to companies in the transportation sector that looked like they came from an employee of the World Health Organization.
They included the WHO logo and instructions about how to monitor crews aboard ships for coronavirus symptoms, and they included an attachment with instructions. This phishing e-mail attack was
intended to lure individuals into providing sensitive data, such as personally identifiable information and passwords.
• Companies in the US and Australia have been receiving malicious e-mails that use a display name of “Dr. Li Wei” and are titled “CORONA-VIRUS AFFECTED COMPANY STAFF.”

What you can do

All that it takes to break into your business is a cleverly worded e-mail message. If scammers can trick one person in your company into clicking on a malicious link, they can gain access
to your data. It’s important to train your staff to identify suspicious e-mails. They should avoid clicking links in e-mails that:
• Are not addressed to them by name, have poor English, or omit personal details that a legitimate sender would include.
• Are from businesses they are not expecting to hear from.
• Ask you to download any files.
• Take you to a landing page or website that does not have the legitimate URL of the company the e-mail is purporting to be sent from.
• Include attachments purportedly with advice for what to do. Do not open them even if they come from relatives or friends.

WITH THE current isolation orders for most workers in California, many companies have had to scramble to put systems in place to allow their employees to telecommute. Many businesses are not set up for having employees work from home, and they have legitimate concerns about productivity and communications. But there are steps you can take to make sure that you keep your employees engaged and on task.

1. Make sure they have the right technology

If you don’t already have one, you may want to consider setting up a company VPN so your employees can access their work e-mail and databases. You will also need to decide if you are going
to provide them with a company laptop, and you need to make sure that they have an internet connection that is fast enough to handle their workload. Also provide an infrastructure for them to be able to work together on files. If they are not sensitive company documents, they can use Dropbox or Google Documents, which allow sharing between co-workers.

It’s important that you provide clear instructions to remote workers. Some people do not perform well without direct oversight and human interaction. Without that factor, you will need to spell out your expectations and the parameters of the projects they are working on in detail. Make it clear that if they are confused or unsure about any part of the work, they should contact a supervisor for clarification. If you can eliminate misunderstandings, then your workers can be more efficient.

To hold your employees accountable for being on the clock, schedule calls or virtual meetings at regular intervals. Even instant messaging works. During these meetings they can update their
superiors on their work. This also helps with productivity, since there are consequences for failing to meet expectations and coming to the meeting empty-handed. Their supervisors should be working when they are, so they can be in regular communication.

One of the hardest parts of working from home is the feelings of isolation and detachment from colleagues. It’s important that you build in interactive time for your workers. One way to do that is by using a chat program like Slack, Hangouts or WhatsApp (which has a group chat function). For remote workers, these programs are a blessing because they make it easy to keep in touch with their colleagues in and out of the office – and they level the playing field, so to speak, by making distance a non-issue.

With employees working from home, you also increase your cyber risk exposure, especially if they are using a company computer that is tapped into your firm’s database or cloud. Teach them cyber security best practices, such as:
• Not clicking on links in e-mails from unknown senders.
• Making sure their systems have the latest security updates.
• Backing up their data daily.
• Training them on how to detect phishing, ransomware
and malware scams, especially new ones that try to take advantage of people’s fears about COVID-19. 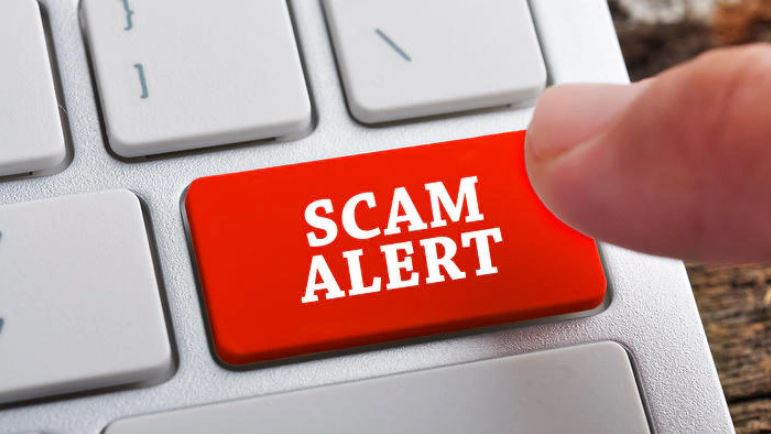