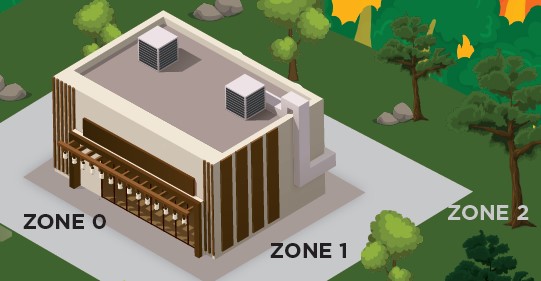 AS WILDFIRES grow in number, intensity and scope, the cost of paying for the resulting claims is causing a property insurance crisis in some parts of the state that shows no sign of disappearing anytime soon.
Commercial property insurance rates have skyrocketed for businesses in areas exposed to wildfire risks. Many have received non-renewal notices and have had to secure coverage with the market of last resort, the California FAIR Plan. Here’s what’s going on and what your options are if your commercial property policy is non-renewed.

What insurers are doing

While rates are increasing nominally in most of California’s larger cities due to higher construction costs, it’s a different story in smaller cities and towns.
Insurers are responding. Some are pulling out of the state or ceasing to write policies in areas they deem high risk and are issuing non-renewal notices. Those that continue to write business in high-risk areas are taking steps to rein in their risk:
Increasing rates – Many carriers have more than doubled rates for at-risk properties.
Hiking deductibles – Many carriers are raising deductibles in wildfire-prone areas.
Stricter terms – Some insurers are limiting the amount they will pay out if a building is destroyed. That can sometimes be as low as 20% of the value, meaning the rest would have to be covered out of pocket by the property owner.

Defensible space: Maintain a defensible space around your building, usually all the way to the property line. You can find a thorough description of how to create a defensible space here.
Non-combustible materials and other measures: Use only non-combustible building materials, such as fire-proof shingles for your roof. The insurer may require you to shore up roofs, gutters, vents and siding and ensure there are no gaps that would allow embers to penetrate.
They may require exterior wall cladding made of non-combustible siding materials.
Reliable water supply: Insurers are requiring property owners to have clear access to a reliable water supply, including proximity to public hydrants and the possible installation of private-site yard hydrants. The availability of a reliable water supply is critical and should be evaluated frequently.
You may also consider installing a back-up water supply, such as a fire pump and tank.
Routine clearing: Insurers are requiring property owners to have a routine property clearing regimen that includes regularly removing dried vegetation from the property and removing debris or other flammable materials. Debris and vegetation are the tinder for large fires.

Your options if canceled

If you’ve been cancelled by your insurer, we can mount a search for replacement coverage. If all California licensed insurers that we have access to
reject your policy, we have two choices:
The non-admitted market – These are insurers that are not licensed in the state of California, but they are viable insurance companies nonetheless. They can offer policies that may not cover everything a homeowner’s policy from an admitted insurer would have. Policies can often be customized for the insured.

California FAIR Plan – We can only go to the FAIR Plan if you’ve thoroughly exhausted the options available through the voluntary market and been denied coverage.
If only one admitted insurance company is willing to write your policy, no matter how steep the premium is, you cannot go to the FAIR Plan for coverage.
Not only are FAIR Plans more expensive, but they offer fewer coverage options and lower policy limits. That said, the limits have doubled in 2022 to $6.8 million per policy.

MORE BUSINESSES in wildfire-prone areas are facing a difficult commercial property insurance market as insurers reduce their exposure and some have left the market altogether.

Many businesses in areas that have already been ravaged by fires in the past, or those located in areas that are near forests and large grassy areas are seeing their premiums increase – sometimes substantially by 300% or 400%.
Also, more businesses are finding few insurers that are willing to cover their properties.

According to a new report by insurance rating firm AM Best, California wildfires have caused over $4 billion in commercial property losses for insurers in three of the past four years.

It’s expected that 2021 fire losses could be even greater than those of the prior four years.

Many insurers are applying three metrics in evaluating exposure to fire:
Brush mapping – This is a map of the tinder and brush, nearby trees, and other items that could contribute to your building(s) catching fire.
Wildland-urban interface – The closer that a building is to nature, the more at risk it is. A wildland-urban interface is defined by the Forest Services as a place where “humans and their development meet or intermix with wildland fuel.”
Concentration of properties an insurer covers in your area – If your carrier has a high concentration of policies for other properties in your area, they may opt to non-renew policies in order to reduce their exposure.

The California FAIR Plan Is the Market of Last Resort

If all insurers have rejected a property, we have two options:

– The non-admitted market – These insurers, which include Lloyd’s of London, are usually willing to write buildings in higher-risk areas, but they too have increased their underwriting criteria.

– The California FAIR Plan – If we cannot find an insurer in the non-admitted market, the last choice is the FAIR Plan, which is the market of last resort for property owners that cannot get coverage elsewhere.

Policies cover losses from fire, lightning, and explosion only.
Also, policies are limited in what they will payout, so if you have millions of dollars tied up in equipment and/or inventory, the policy may not be enough to cover all the damage you incur from a wildfire.

Your options if you go to the FAIR Plan

If the FAIR Plan coverage is not enough for your needs, we can find another insurer that provides excess coverage that
would kick in at a certain dollar amount of damage.

And for risks that are not covered, we would have to also find you a “differences in conditions” policy. Combined with FAIR Plan coverage, adding such a policy can nearly mimic the coverage of a commercial policy.