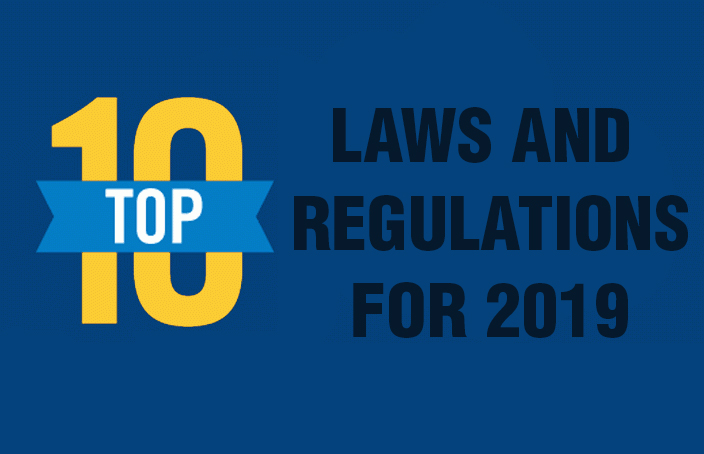 EVERY YEAR comes with new laws and regulations that affect employers. It pays to stay on top of all the few requirements, so we are here to help you understand those that are most likely to affect your business. The following are the top 10 laws, regulations and trends that you need to know about going into 2019.

2. Data privacy
Companies that collect data on their customers online should start gearing up in 2019 for the Jan. 1, 2020 implementation of the California Consumer Privacy Act of 2018, which is the state’s version of the European Union’s General Data Protection Regulation.

The law applies to businesses that:
• Have annual gross revenues in excess of $25 million,
• Annually buy, receive for their own commercial purposes, or sell or share for commercial purposes, the personal  information of 50,000 or more consumers,  households or devices, and/or
• Derive 50% or more of their annual revenues from selling consumers’ personal information.

3. Independent contractors
While this legal development happened in 2018, now is a good time to go over it. In May 2018, the California Supreme Court handed down a decision that rewrites the state’s independent contractor law.  In its decision in Dynamex Operations West, Inc. vs. Superior Court, the court rejected a test that’s been used for more than a decade in favor of a more rigid three-factor approach, often called the “ABC” test.

Employers now must be able to answer ‘yes’ to the following if they want to classify someone as an independent contractor:

• The worker is free from the control and direction of the hirer in relation to the performance of the work, both under the contract and in fact;
• The worker performs work that is outside the usual course of the hirer’s business; and
• The worker is customarily engaged in an independently established trade, occupation or business of the same nature as the work performed for the hirer.

The second prong of the test is the sentence that really changes the game. Now, if you hire a worker to do anything that is central to your business’s offerings, you must classify them as an employee.

4. Electronic submission of Form 300A
In November 2018, Cal/OSHA issued an emergency regulation that required California employers with more than 250 workers to submit Form 300A data covering calendar year 2017 by Dec. 31, 2018. The new regulation was designed to put California’s regulations in line with those of Federal OSHA.

This year, affected employers will be required to submit their prior year Form 300A data by March 2. The law applies to: 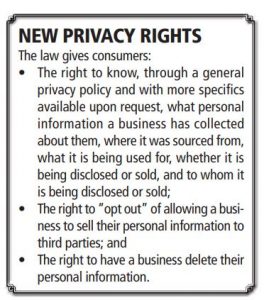 5. Harassment non-disclosure
This law, which took effect Jan. 1, 2019, bars California employers from entering into settlement agreements that prevent the disclosure of information regarding:

6. New tiered minimum wage
On Jan. 1, 2019, the state minimum wage increased, depending on employer size, to: 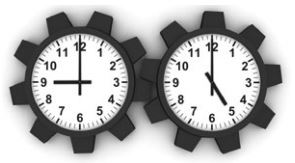 The DOL is aiming to update FLSA regulations that set a salary threshold below which employees must be paid overtime.  Today, it remains at $23,660, after the Obama administration unsuccessfully attempted to raise it to $47,476. President Trump’s DOL is expected to propose a threshold somewhere between $32,000 and $35,000.

8. Accommodating lactating mothers
A new law for 2019 brings California statute into conformity with federal law that requires employers to provide a location other than a bathroom for a lactating mother to express milk.

9. New bar for harassment liability
A California Appeals Court ruling in 2018 set a new standard for what constitutes harassment in the workplace in a case that concerned a correctional officer at a prison who was mocked about his speech impediment on numerous occasions by co-workers.

The significance of the case for employers is that even teasing and sporadic verbal harassment can be enough to create a hostile work environment and, hence, liability. This year, reduce the chances of liability by having an antiharassment policy. Include training and make sure there are steps for reporting harassment, a mechanism for investigating it, and that the ramifications for harassers are clear.  Look for the Division of Occupational Safety and Health to release its proposed indoor heat illness regulations in the first quarter, with possible implementation by the summer.

Draft rules that have been floated so far would apply the  standard to indoor work areas where temperatures equal or exceed 82 degrees. All of the provisions would apply to  workplaces where it’s at least 92 degrees.

Under draft rules, those employers would have to:
• Provide cool-down areas at all times.
• Encourage and allow employees to take preventative cool- down rests when they feel the need to protect themselves.
• Implement control measures like:
– Engineering controls
– Isolating employees from heat
– Using air conditioning, cooling fans, cooling-mist fans, and natural ventilation