THE U.S. Supreme Court’s decision to not hear an appeal of the sweeping California independent contractor law known as AB 5 is likely to cause serious personnel headaches for motor carriers in the Golden State.
While the law is already in effect, there had been an injunction exempting trucking companies after the California Trucking Association had sued to overturn the law as it applies to the industry.
The Supreme Court’s decision effectively lifts the injunction, and the CTA is sounding the alarm on how it will wreak havoc on motor carriers. 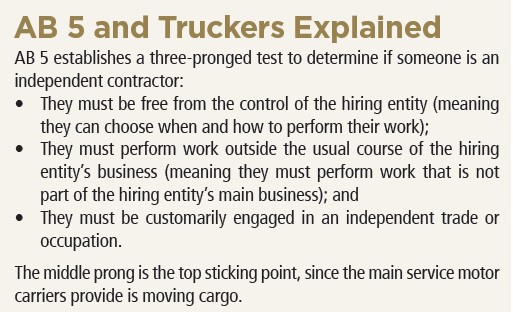 Owner-operators who are classified as employees under this test will be covered by California labor and employment laws. The hiring entity will have to treat them like employees, meaning they have to secure workers’ compensation coverage, pay employment taxes and extend benefits to them. They also have to abide by labor laws and wage and hour statutes.

Exclusive leased owner-operators – These operators drive exclusively for a hiring trucking company and work under the latter’s authority. They may or may not own their
own trucking equipment (tractors and trailers) and do not have their own motor-carrier operating authority from the Department of Transportation.
They’ve operated as independent contractors because the lease agreements let them choose their own loads, but the agreements bar them from using their equipment to drive for other entities.
Effect: These operators will essentially be illegal. 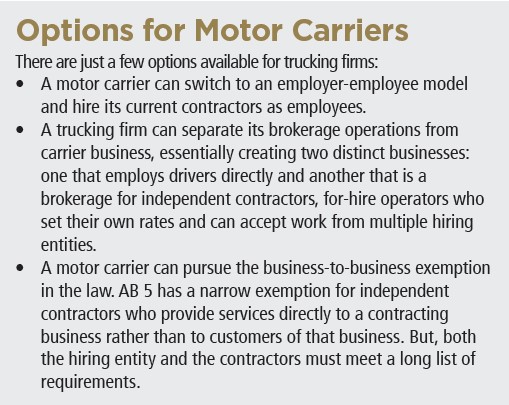 Non-exclusive leased owner-operators – These contractors own their own equipment and have DOT motor-carrier operating authority. They move cargo primarily for a motor carrier with which they contracted but they can also work for other customers.
Effect: This group may or may not be affected depending on the arrangements they have with the motor carrier.

For-hire owner-operators – These operators own their own equipment, have their DOT motor-carrier authority and source loads through brokers or other means. They are their own bosses and they choose whom they will move freight for.
Effect: This subset is the least likely to be affected.